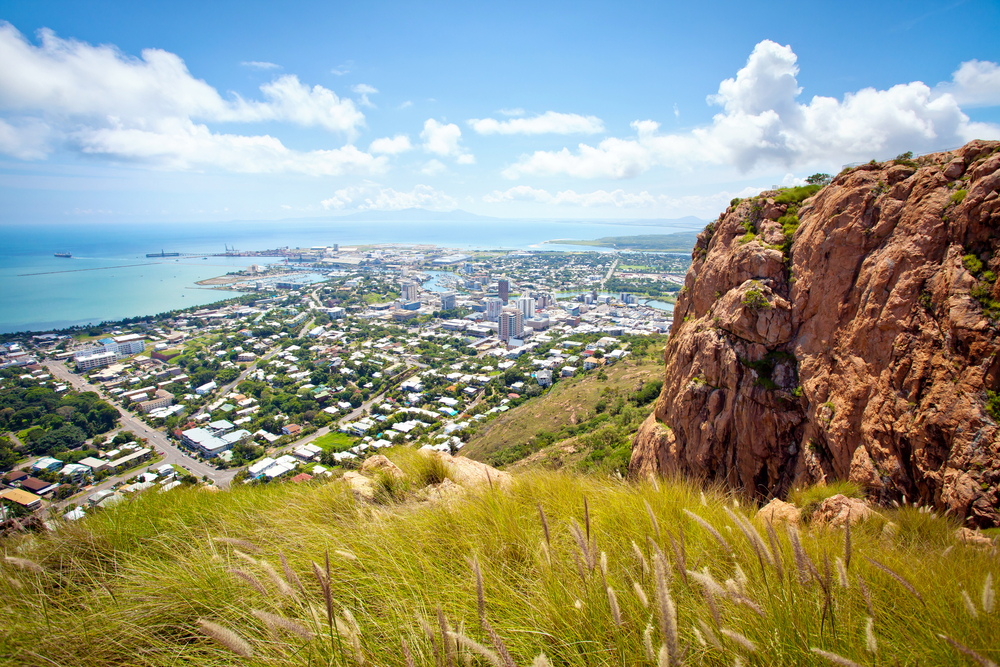 Queensland’s second-biggest city, Townsville is best known as the gateway to Magnetic Island and as the home of The North Queensland Cowboys football team. But with warm weather all year around, bays, beaches and national parks, and an incredible heritage, it turns out that Townsville is also a fabulous family holiday destination.

Magnetic Island, just 20 minutes by ferry from Townsville, is a natural wonderland dotted with idyllic bays and beaches, and almost 25 kilometres of walking trails. More than half of the island is National Park so there are plenty of trails for every age and ability including the Forts Walk, a great trail to take if you want to spot one of the cute and cuddly members of Australia’s largest colony of wild koalas.

Take a step back in time in Charters Towers, an outback town around an hour and a half west of Townsville. A former gold rush town, Charters Towers was once the second largest town in Queensland and its streets are still lined with magnificent heritage buildings. Once you’ve had your fill of historic buildings, get your cowboy boots, pan for gold at Ravenswood, catch a drive-in movie or enjoy an outback encounter with some Texas Longhorn cattle on a wagon tour.

Top things to do in Townsville & Charters Towers

With so much to explore, we’ve rounded up our 10 not to be missed sights.

Things to do in Townsville & Charters Towers with…

Townsville is an ideal spot for younger kids. There are heaps of supercool playgrounds that will have your kids squealing in delight. Sanctum is a massive play area with state of the art equipment and loads of space for little legs to run about. Rowes Bay’s Soroptimist is a ship-themed playground with two separate areas including one just for toddlers. And if the kids want to cool off while they play, there’s a huge water playground on the beachfront at The Strand where they can squirt low-pressure water cannons and frolic under the water pouring from the huge tipping bucket. There are picnic areas surrounding the park and if they feel like a dip, the Rock Pool Swimming enclosure is the spot. Afterwards gobble down one of the uniquely flavoured ice-creams at Juliette’s while you stroll along the beach or The Strand.

Animal lovers will be in critter heaven in Townsville and surrounds.  Little ones will love getting cosy with the critters at Billabong Sanctuary, where they can hand feed kangaroos, cuddle a koala, snuggle with a snake or just check out the interactive wildlife shows.

Breakfast with koalas, snakes and lizards at Magnetic Island’s Bungalow Bay Koala Park. Home to the world’s largest colony of wild koalas, Bungalow Bay runs koala presentations three times daily and offers opportunities to get up close with some of the furry local residents. And at Reef HQ Aquarium, the largest living coral reef aquarium in the world, the kids can see the pretty corals and unique marine life of the Great Barrier Reef replica without getting wet. Home to 150 species of fish, and 120 species of hard and soft corals, kids will especially love walking under a curious reef shark or friendly ray in the walkthrough tunnels.

Kids will love going for gold at Charters Towers. They might not strike it rich, but they can at least try their luck panning for gold flakes at The Miner’s Cottage. Or, for a real taste of country life, head to a very special cattle farm, Leahton Park. Here kids, and their parents, can take a horse-drawn wagon ride back to the old west in place where America’s wild West meets the Australian bush. Enjoy damper and billy tea from a genuine cowboy chuck wagon as you go on a safari searching for surreal looking Texas Longhorns, water buffalo, American bison, African watusi and Scottish Highland cattle. Afterwards head back to town to catch a flick the old-fashioned way at one of Queensland’s oldest drive-ins, and pick up a bottle of Whitbreads original fizzy drinks, with recipes that have remained unchanged for the past 120 years, to wash down all that popcorn.

There’s plenty of adventure to be found around Townsville but Magnetic Island is the centre of all the best water based action. You can set sail on a catamaran, peddle an aquabike or feel the wind in the sails of a sail board. There’s incredible snorkeling and you can even take it to the next stage with scuba lessons, or for those already experienced at diving, head out on a scuba diving tour. One of the most fun ways of exploring the island is by Moke, but there are also options of doing it by trail bike, scooter or bicycle. Or maybe you’d prefer to zoom around the island on a Jetski Tour. If you’re feeling especially energetic, head out to spot some of the island’s incredible marine life, including dolphins and turtles, on a guided Sea Kayak tour.

Best time to visit Townsville & Charters Towers as a family

With an idyllic location in glorious tropical north Queensland, this region only experiences two seasons – wet (also known as the monsoon season) and dry. The best time to visit is during the dry season from April to October. But this is also the busiest tourist time as people come to escape cooler southern winters. Peak is around Easter, meaning plans need to be made early to visit as accommodation and flights cab get booked out. Days are usually filled with bright sunshine and clear skies making for the perfect environment for exploring this less-known tropical paradise.

Tourist numbers tend to drop during the rainy season, making it a great time for deals on accommodation, flights and vehicle rentals. At this time of year, the humidity soars, though thunderstorms, usually in the late afternoon, provide a welcome relief. The higher regional rainfall transforms the hinterland into a lush oasis but it’s a good idea to pack a raincoat and umbrella.

With the reef on one side and the fruitful Burdekin farming lands on the other, this region has no shortage of fresh produce.

If you are self-catering, consider visiting any of the local markets to top up your supplies direct from the producer.  A fresh mango, with its sweet and sticky juice, is a must. Just remember to have plenty of wipes handy to clean up sticky little fingers. A mango flavoured ice-cream, is just as delicious, but a lot less messy. If a hearty steak is beckoning, the prime beef from Charters Towers is some of the best in Australia. And then there are all the incredible reef delicacies, fresh from the trawler.

Palmer Street, in Townsville, is a great spot for dining. Home to award-winning chefs, you’ll find a little of everything from high class-restaurants serving fine foods from around the world to budget bites.

Things to do for free in Townsville & Charters Towers