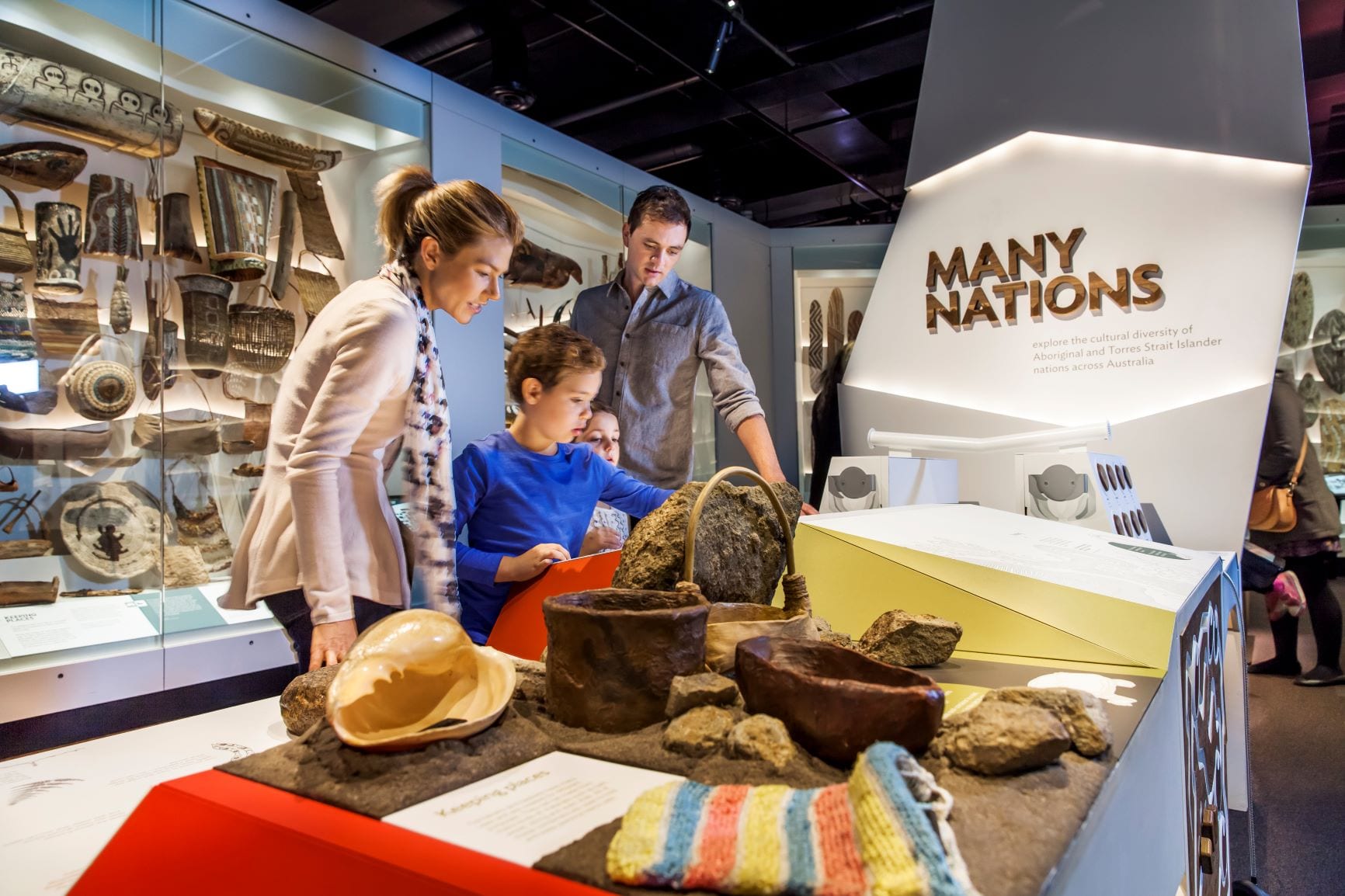 The ultimate guide to things to do in Melbourne with kids

Famous for its rivalry with Sydney, you’d think it would be all about show in the Victorian capital. But Melbourne’s magic is best uncovered by seeking out its secrets. Splashes of colour await in its laneways. Dedicated children’s play spaces are tucked away in major galleries. A Michelin star restaurant takes the guise of a relaxed dumpling bar.

We don’t mean to say that this city of murals, markets and museums is shy and retiring. Far from it. Melburnians are cocky and confident in their coffee. The MCG is the largest sporting arena of its kind in the southern hemisphere. Melbourne Comedy Festival is famous for getting the biggest laughs.

But we definitely recommend exploring Melbourne inside and out with kids, going beyond the obvious sights. World-class attractions collide with humble, hipster venues in hidden corners. Toddlers and teens alike are catered for, and there’s always something happening on the calendar. No matter what you come for, you’ll be surprised and delighted by the unexpected family adventures you upend in Melbourne.

Things to do in Melbourne with…

While Melbourne may conjure up images of swanky bars and refined art galleries, the reality is that it is a city that knows have to have good, simple, hands-on fun.

ArtPlay is designed specifically for babies through to 12 year olds. The venue hosts loads of workshops and events covering just about every creative art you can think of including ceramics, mosaics, puppetry, circus, and singing.

Melbourne Zoo is perfect for close-up animal encounters, and the Melbourne Museum has a Children’s Gallery especially for 0 to 5 year olds. Here, toddlers can excavate fossils, test out animal noises and get rid of their wriggles in an outside play area. The museum is also well suited to older siblings who will love encountering famous Phar Lap and a giant whale skeleton. Excellent Social Stories are provided for kids who have extra needs or like feeling prepared.

Take your tiny tots on an easy weekend getaway to the Dandenong Ranges and Yarra Valley. Only 35-kilometres east of Melbourne, there is plenty to do in the region. Visit koalas and roos at the Healesville Sanctuary, board the Puffing Billy steam train and take a tractor tour of Rayners Orchard where you can pick your own fruit.

Melbourne really is a massive playground. Run wild at St Kilda Adventure Playground and build quirky creations at a Lego Education Centre workshop. At ArtVo in Docklands, you interact with the ‘trick’ art in 11 themed zones. The 3D features and optical illusions make it look like you’re standing in the artwork, so bring a camera!

Animal lovers will go marine mad at SEA LIFE Melbourne Aquarium. At Collingwood Children’s Farm, 5 kilometres from the CBD, you can milk a cow, pat guinea pigs, listen to storytelling in the barn and relax in the outdoor café.

The to-do list continues on family favourite Phillip Island. You will have heard of the Penguin Parade, but there are also more animal encounters to be had at Churchill Family Farm or the Koala Conservation Centre. Then, pick up speed on the go-karts at Phillip Island Grand Prix circuit.

Keep active and outside with older primary schoolers. Let loose at Luna Park on the St Kilda Foreshore. Wander Werribee Open Range Zoo, just out of town. Check out the world-famous Melbourne Cricket Ground (MCG), the largest stadium in Australia. It is also the home of the newly opened Australian Sports Museum with sports memorabilia, famous faces in hologram form and interactive football, cricket netball activities.

Traverse the town on two wheels with Melbourne’s many bike trails. The 33-kilometre Main Yarra Trail follows the Yarra River from Princes Bridge through to the Mullum Mullum Creek Trail. The Capital City Trail loops the city centre and is also fairly flat, ideal for cyclists and pedestrians.

Museums more your style? Scienceworks in Spotswood is packed with hands-on exhibits. In fact, it has the Melbourne Planetarium, a Lightning Room and an historic Pumping Station. Similarly, the National Gallery of Victoria has a great events schedule, including ‘Relaxed Evenings’ for visitors with sensory sensitivities.

It is all about the street art and the selfies in Melbourne. Start your street art tour on Hosier Lane, and be sure to explore Flinders Lane and Blender Lane. Follow this route to explore more arcades and laneways. Then take the perfect sunset Insta shot at the old Princes Pier or in front of the 82 colourful wooden bathing boxes on Brighton Beach. Both featured in our round-up of top Instagram destinations for teens around Australia.

Arty teens should continue to the Arts Centre Melbourne. It is home to the State Theatre, Playhouse and Fairfax, but also to Australian Music Vault. This free, immersive exhibition shows off Aussie music icons through digital interactive experiences and memorabilia.

Feeling sporty? Snag a ticket to the Australian Open in summer, or catch a wave at the new URBNSURF surf park. Feeling brave? Embark on a spooky ghost tour of Old Melbourne Gaol, where Ned Kelly met his grisly end after 2 years on the run. Enjoy the view from the Melbourne Star Observation Wheel, or swap the city grind for nature in Organ Pipes National Park. The closest national park to Melbourne, it appeared in our picks of Victoria’s great outdoors for teens.

The atmospheric Shipwreck Coast, best explored via the Great Ocean Road, is home to the famous rock formations of London Bridge and Twelve Apostles. Time your visit to coincide with Port Fairy Folk Festival. Get active on a scenic walk at The Crags, a kayaking outing on George River or by surfing at Lorne Beach. Equipment is available for hire.

Best time to visit Melbourne as a family

Melbourne truly is a year-round destination. It is famous for covering four seasons in one day, so whenever you visit, pack a brolly and warm layers. Summer promises warm nights, bucketloads of festivals and the Australian Open Tennis Championships. Winter days are cold and crisp.

Melbourne’s worst-kept secret is that it boasts the cheapest Michelin star restaurant in the world. Tim Ho Wan dumpling bar kicked off in Hong Kong, but has brought its steamed pork dumplings, shrimp rolls, pork buns and spring rolls to Melbourne. You can be in and out quick smart if you go mid-week. Otherwise, you’ll contend with a queue of fans! An alternative is the dumpling menu of Taiwain’s Din Tai Fung.

Trunk Diner is a family favourite, with an American style menu brimming with burgers, hot wings and sundaes. 8bit also offers retro American vibes. Fill up on pizza and pasta from +39 Pizzeria or Bluetrain, or souvlaki and calamari at Stalactites.

Watch the boats pass as you tuck in to the all-day menu at Pilgrim Bar, settled on the Yarra at Federation Wharf. Grab a great coffee next door at Riverland. For more waterviews, soak up the beachy bliss of Pantry in Brighton, which has a specialised kiddie menu.

We also love Leroys Café in Newport for a lazy Sunday brunch. It has a great ‘Lil Superheroes menu, and a Secret Garden with chalkboards, playground and toys.

Things to do for free in Melbourne

Need a break from the city? These are the best short family road trips from Melbourne. Pack your bags and get driving.

Celebrate domestic wonders by exploring the Australian alternatives to famous International destinations when you holiday at home this year.

Lap up the luxury at The Langham, Melbourne